The sighting of the island of Corvo by the Portuguese navigator Diogo de Teive might have occurred in 1452, at the same time as the discovery of the island of Flores. Given its small size, this island did not attract the attention of those who looked forward to settle in the Azores. Its natural, pure state was only broken during the 16th century, when the donatory-captain Gonçalo de Sousa sent a group of slaves, probably from Cape Verde, to Corvo to farm the land and breed cattle. In approximately 1580, some settlers who came from the island of Flores increased the local population.

Life in Corvo runs slowly and peacefully, guided by the rhythms of agriculture, fisheries and cattle breeding , to assure the survival of the community. But contrary to assumption, the geographical position of the island allows it to exceed its expected isolation. In fact, Corvo was the reference point where the Portuguese fleets came together to receive the ships coming from the various points of the Portuguese and Spanish Empires and, from there, to escort them safely to mainland Europe. Therefore, at the end of the 16th century and throughout the 17th century, this isolation was broken by the frequent arrival of privateers and pirates looking forward to pillage the land and to capture hostages. They faced a strong resistance in Corvo, and it is quite historic the defeat of the Barbary Corsairs from North Africa in 1632, with the locals throwing stones to repel the invasion. According to legend, in this hard and uneven battle, the local population was helped by the Saint Nossa Senhora do Rosário (Our Lady of the Rosary), who “deflected the bullets fired by the pirates and returned them, in multiple figures, back to the ships of the Moors, thus dispersing them.” Since then, this saint became known as Nossa Senhora dos Milagres (Our Lady of Miracles).

The bravery of the inhabitants of Corvo became once again evident in 1832, when a group of men went to the island of Terceira to plead for the relief of the heavy tax levied by the donatory captain of the island and by the Crown. Mouzinho da Silveira, a minister of King Pedro IV, who was at the time organising the liberal wars from Angra, was impressed with the enslavement faced by the local population. Thus, he proposed the cancellation of the tax paid in cash and a reduction in half of the payment made in wheat. During this very year, the locality was given a town charter and its name was changed to Vila do Corvo (Town of Corvo).

During the 18th and 19th centuries, American whaling boats arrived at the coasts of the islands of the Western Group. Some locals were recruited to hunt sperm whales, and they earned the reputation of being very courageous harpooners. In 1864, Corvo had almost 1,100 inhabitants, but this figure started decreasing from then on. Between 1900 and 1980, Corvo’s population decreased from 808 to only 370 inhabitants, with this reduction being mainly caused by emigration to the United States and Canada.

In 1983, the opening of the airport of Corvo was crucial to modernise the island’s infrastructure. Since 1991, the operation of scheduled flights from the islands of Flores, Faial and Terceira has contributed to the full integration of the island into the Archipelago. Agriculture, centred on cattle breeding, is the current mainstay of the local economy. 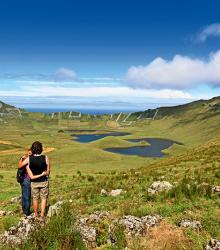 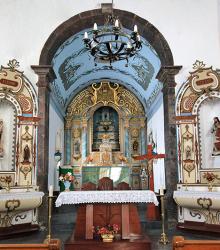 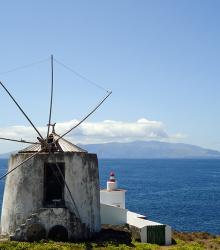 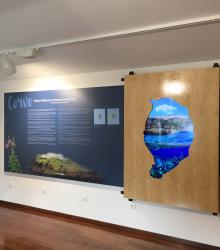